Group Networking & Life Review for Transitioning: What Can Help? 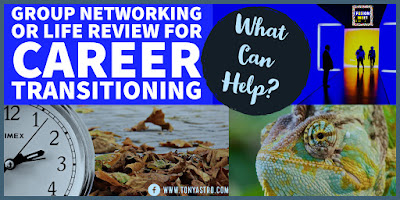 Joel is a 52-year-old multi-cultural man who recently retired from an executive military position, non-commissioned officer in the US Navy, in a large command with 40 personnel under him. Although he says he looked forward to retirement, he never developed any interests or relationships outside of work or military. He complains of feeling "tired" and "bored." His wife, Joan (not her real name), a small business owner and homemaker. Now that Joel is home during the day, he tries to show her ways to be more efficient in doing the household chores. Joan describes frustration with his "supervision," and the difficulty of finding time for herself or her friends when Joel is underfoot all day.  Now Joel comes up to me for career advice, how would I approach it?

First, I would state to the client, the two benefits of receiving an individual career counseling or personal branding and more importantly a group-talk between Joel and Joan.  Then I would do the following steps:

As a counselor, I cannot imply or discuss the medical condition of the client, but upon disclosure from Joel, I can state that he is suffering from a mild depression brought about by a change of pace from previous 9-5 drudgery (such as multi-tasking of supervising his personnel, military duties, being deployed, etc.) of being a navy ship executive “supervising” his personnel to a slow, less pressure lifestyle. Not all, but various people (civilian or military) react the same way to retirement; some will be looking forward to a chance to relax or relief from the stress of working in a large company or military facility, particularly those who don’t have the many perks and excitements of an executive or military officer.

For men, retirement is a concern that can affect the very essence of their lives. Many men derive an almost single-minded identity from their work. Many develop no diversified interests outside their employment and are caught up in a narrow definition of who they are and what they are worth as people. Work and life become so interconnected that the loss of a job can eliminate the reason for living (Butler, Lewis, & Sunderland, 1998).

What Joel needs is to refocus out of his previous lifestyle to his new life and to “seize the day” of being at home enjoying other activities besides “supervising” as the executive boss of Joan so Joan can find more time for herself. Counselors need to help Joel reevaluate his transition through individual mentorship or counseling (and at the extreme maybe recommend for psychotherapy or faith-based group meetings such as Celebrate Recovery). Joel and Joan must first admit to the counselor of having some type of career transitioning concern and be able to move forward in their goals and aspirations. The counselor will conduct individual counseling for the first session through a narrative or life review.

Davis and Degges-White (2008) use the term life reviews as a naturally occurring process in which individuals share their stories through written or oral means. Individuals depend on language to make sense of mental images and on constructed symbols to communicate ideas and intents to others.

A narrative or life review counseling would be a very appropriate technique to know and bring out questions and answers individually like:
1. What are the things you miss from being an executive? (Question for Joel)
2. Are there any activities you have done in the past 5 years that helped you not to feel depressed? (Joel)
3. When and how did you feel that Joel didn’t understand you or supervised you like one of his employees? (Joan)
4. Have you tried doing something fun together since you (Joel) retired? (Both)

A counselor would also propose having Joel and Joan try to write down their daily events through a journal for their own exclusive readings. Afterwards, they should individually review anything they write and observe within themselves and at some point, return to the counselor for a follow-up.
Davis and Degges-White in their studies: Comparing participants' earlier writings with their later writings and asking participants whether they thought the life review activities improved their ability to view themselves gave a more comprehensive perception.

Overall, the participants viewed the activity as one that provided personal analysis rather than a pure description of past activities or relationships. They generally believed, they did deepen their understanding of themselves, and they felt that the process of looking back did provide opportunity to find connections (i.e., self-actualization). Their comments revealed that the experience encouraged them to undertake a personal search for meaning (Davis and Degges-White, 2008).

Adults continuously experience transitions. Adults’ reactions to transitions depend on the type of transition, the context in which it occurs, and its impact on their lives. A transition has no end; rather, a transition is a process over time that includes phases of assimilation and continuous appraisal as people move in, though, and out of it (Goodman 2006).

Transition counseling through individual and group is a process that they both must go through formal counseling. Also, I would advise Joel and Joan to have activities together and join a group like the Association of Retired Americans (AARP), local church community groups, networking of like-minded people (such as business networking or toastmasters), cultural meetup (such as FusionMeet) and other local community group of baby boomers or couples. This will keep Joel’s mind out of his previous lifestyle and transitioning both towards being a normal couple and they may see that others are in similar situations in a group including inter-generational.

In groups, clients have opportunities to hear about a variety of sources of support and coping strategies used by others. When we ask adults, what has helped them survive, we most often hear about a sense of humour, support from special people, and faith (Goodman 2006). 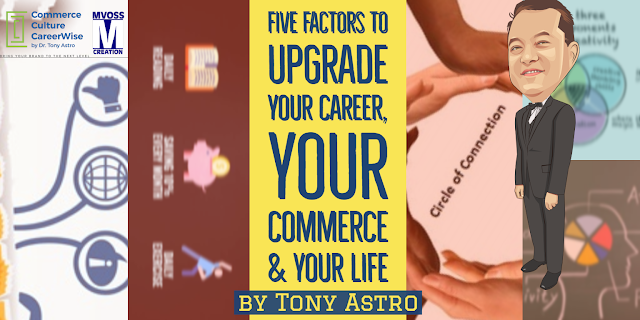 Five Factors to Upgrade Your Career, Your Commerce & Your Life 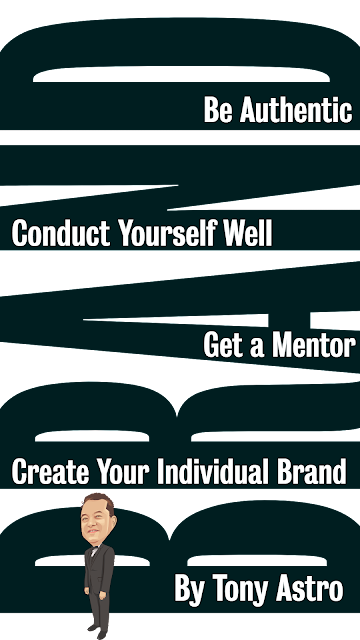 My 3 Answers in Creating Your Individual Brand